I’m not even keeping up with my ‘one post a month’ target at the moment am I?!  But hey, tell you something you don’t know – right?  I promise I’ve had my reasons though, the main one being this: 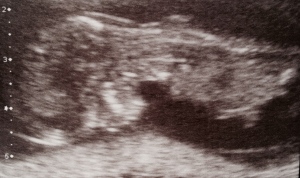 Meet Fidget, mostly known as ‘our baby’ if you ask Boy.  It’s earned the moniker as during the dating scan earlier this week they did not want to stay still and have their measurements taken, or give the sonographer an easy first appointment of the day!  Hence the face down, slightly blurry image!  Everything looked good though and the blood tests have come back as all being well.  We’ve also made it out of the first Trimester so are starting to feel a little less worried and able to share the news.  We’re hoping to meet Fidget in mid to late February.

I’ve been too tired to sew and the be quite honest, not even sure WHAT to sew!  Bed time has been 9pm for weeks, which basically means no sewing.  Sleep was the priority!  Instead I’ve been hoping, dreaming and making some vague plans – what to wear being one element.

I’ve had fun sketching in my Fashionary and come up with a few ideas that I hope will work in the coming 6 months or so as well as afterwards, and some may even have a longer ‘shelf life’.

Here’s what I’ve come up with:

Butterick 5860, which is a wrap dress.  I’ve got some fabric earmarked to make at least two of these as I suspect they’ll become my uniform at work.  I have a colleague who had the most chic and pulled together maternity wardrobe during her recent second pregnancy and is the inspiration for a couple of pieces in my planned wardrobe…

Staple Dress by April Rhodes but with the shirring falling just under the bust and with a bump accommodating adjustment.  This is currently in progress.  I’ve just got to get brave to make the bias binding from a very silky rayon.  I’m gonna have to face that soon as I need it for a wedding in just under two weeks!

Papercut Patterns Circle Top as this will work now and well into the future!  So far I’ve got a navy and a purple version planned.  These will be in solids to give maximum wearing potential and are in two of my basic colours.

Maria Denmark Day to Night tops (why do I always want to type Knight when writing about this top?!).  I’m going to use Zo’s maternity alteration on these as I need some tops to go with the maternity jeans I had when pregnant with Boy.

I’ve also found a gorgeous French company called Deuxieme Arrondissement which make some gorgeous maternity patterns.  I’ve bought two:  The Duo 13H and Robe Minuit.  I think the Duo 13H will be perfect for a wedding we’re going to in December.  They’re completely different to any other maternity patterns out there, and whilst they’re entirely in French, I have faith in my language skills…  They’re printed on lovely thick paper and I’m looking forward to using them!

I’ve also hacked Jamie Christina’s Mission Maxi and am wearing a maxi skirt from a slightly failed experiment as I type.  I basically used a double knit and whilst I compensated for the lack of stretch everywhere else, with my changing chest size, it was a tad snug up top!  So I lopped the top portion off to turn it into a skirt.  I will probably revisit though, armed with a more suitable knit and again use Zo’s tutorial.

Finally, I’ve bought Burda 7239 with the express intention of recreating a top I wore when pregnant with Boy.  It was basically a cropped wrap cardigan with a false top underneath it made of a very light weight cotton.  It was fabulous to wear and my only splurge on maternity clothing with Boy.  It came from Mamas and Papas and cost me close to £40.  I wore it to death.

What I also need to do (and this is going to have to be interspersed by other projects) is crack on with my Papercut Patterns Milano Cape.  This was also inspired by my colleague, but it seemed wrong and tempting fate to do too much work on it whilst trying and then in the early stages of pregnancy.  Call me superstitious or plain daft, but after previous experiences I didn’t want to be presumptuous.

As for Fidget – well not a lot planned there at the moment as we’re not going to find out whether they’re a he or a she until they make an entrance into the world.  We’ve also got the vast majority of what we need for the early months from when we had Boy.  He was also an unknown so all our early baby stuff is neutral!  I think I may have a go at adapting Dog Under My Desk’s Day Tripper bag to be a more fun changing bag as the one from the days of Boy is a very man friendly grey!  Oh, and I’d love to make Boy and Fidget matching quilts…

So, some ‘quick’ projects (I hope) and some more involved…  Time will tell if I manage to get even half of them done!

I’m in! Just a little note of explanation too as I’m aware that this may be a new concept to a few of my lovely readers. Zoe, who blogs at So Zo hosts a challenge each year to encourage us to wear the clothes that we make.

People make a pledge to wear a self made item each day, or three times a week, or whatever works for them. Some are not allowing themselves to repeat an item, others are not allowed to repeat an outfit. It’s about developing your relationship with the items you make and actually wearing them! This is only my second year in taking part, so;

I, Vicki of VickiKateMakes, sign up as a participant of Me-Made-May ’13. I endeavour to wear one me-made item each day for the duration of May 2013.

As Zoe explains: “Me-Made-May ’13 (MMM’13 for short) is a challenge designed o encourage people who sew / knit / crochet / refashion / up-cycle / insert-other-creative-discipline-here garments for themselves to actually wear and love them. The participants decide the specifics of their own challenge pledge so that the month is appropriate and challenging for them” This is Zoe’s post all about it, and you can sign up there as well!

I’m not going to bore you with daily outfit photographs, instead I’ll do a round up each week. I’ll try and post on a Wednesday but that could prove interesting for the last week as we’ll be away and I have no idea what the interwebs connection will be like. So you may get ten days worth in early June once I’ve got home to my computer! But on the plus side there will be photos featuring a caravan, Legoland, Windsor Castle and where ever else we visit!

From last year I learnt that the hardest aspect of this challenge for me is the documentation of what I wear. I’m not exactly comfortable in front of the camera. But, this year I WILL take a photo Every. Single. Day. I’ll try and vary the setting, but the front door may feature heavily, or the building site in the back garden! Does anyone have any tips for self portraits? How to feel less like a dork or poses to try?!

OK, my Lonsdale never made it as far as the cutting table.  I’m going to add it to my sewing list for next summer.  I just couldn’t find the fabric I had in my head for it.  So I think I’ll wait, keep looking and make it in the spring for next summer when it’ll get a lot of wear.  You never know, they may have sorted my wretched hormones out and I’ll be a tad smaller?  This running has to pay off sometime…

So, for this autumn I plan to concentrate on separates.  Here are my ideas…

Pendrell: in striped shirting with cap sleeves.  Probably multiples!  I wonder if this would look good layered over a long sleeve T.  Or would that be too casual for work?  Oh, and of course my gorgeous butterfly / moth fabric.

Circle skirt: in solids and maybe a plaid if I feel confident in matching them…  Navy, purple and maybe a border print with some teal or turquoise.  This pattern from Burda is kinda where I’m thinking.  Ooh, chocolate baby cord?

Beignette:  In solids.  Again in a deep purple, navy, deep red wine colour and maybe even a pinstripe?  I have some cute indigo buttons…

Ginger:  See above!  Maybe another polkadot one in a dusky teal?  I fancy bias though as I think it may hang a little better in the heavier fabric…  Definitely a straight waist band.

Gah, I forgot the Crescent skirt too – and I have a really sweet vintage-esque navy with stylised flowers printed on it too…

You see, my plan is that these will all be wearable for work, with tights.

I’m also going to need to think about my casual, running around with boy outfits.  And these will have to involve trousers some of the time- I’d love to make them I just don’t know where to start.  I do love this burda pattern though: